Sponsored by Museum of Australian Democracy at Old Parliament House 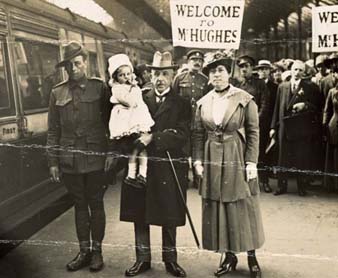 Billy Hughes arrives in London for the Imperial War conference. The arrival of the Rt.-Hon. W.M. Hughes (Premier of Australia) to attend the Imperial War Conference. He was welcomed at Euston by Mrs Hughes, his soldier son, and little daughter, 15 June 1918. Image courtesy of the National Library of Australia, nla.pic-vn3065078

Prime Minister from 1915 to 1923, William ‘Billy’ Hughes was a member of the House of Representatives from federation in 1901 until his death in 1952. During his 51 years as a federal politician, Hughes belonged to six different political parties.

Hughes led Australia for most of the First World War. He went on to represent Australia in peace treaty negotiations in Versailles in 1919. It was the first time that Australian interests had been represented on the world stage, separate to the British Empire.

The Billy Hughes at War website contains documents, images and activities that explore Hughes’ leadership during this significant time in world history.

Born in Melbourne in 1879, Stanley Bruce was Australia’s eighth prime minister. He was elected to the House of Representatives for the Nationalist Party in 1917 but defeated at the general election of 1929. He was the first Australian prime minister to lose his seat while in office. Bruce was again elected to federal parliament in 1931, serving for a year for the United Australia Party.

As prime minister, Bruce led Australia through a time of economic and social development. Historians characterise his government’s policies as based on ‘Money, Men and Markets’. His government received 34 million pounds in British loans for agricultural development, land settlement and immigration. More than 300,000 migrants came to Australia between 1921 and 1929; about 220,000 had assisted fares.

Bruce’s speech in support of the Development and Migration Bill 1926 shows the optimism of the ‘Roaring Twenties’. The optimism, however, was to turn into despair with the world-wide economic collapse in October 1929.

Menzies and Trade with Japan 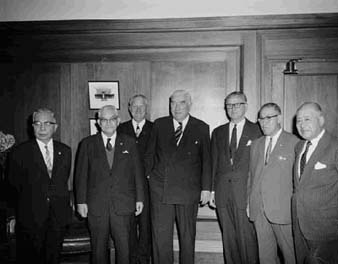 Prime Minister Robert Menzies poses with observers and delegates for an Australian-Japanese business summit. Image courtesy of the National Archives of Australia.

Menzies led Australia through rapid changes after the Second World War. During this time Australia’s economy grew and our society became multicultural due to immigration from countries other than Britain. Menzies understood the reality of the declining British Empire and of Australia’s location in Asia.

Menzies favoured close relations with Japan, a former enemy. His government supported the peace treaty with Japan in 1951. A radio broadcast in 1953 helped persuade the public that it was in Australia’s best interests to move on after the War.

In July 1957, Menzies’ Government entered into an Agreement on Commerce with Japan. This removed Australia’s discrimination against Japanese imports. Within ten years, Japan was the biggest purchaser of our exports. Today, trade between Australia and Japan is valued at $54 billion a year.

Hawke and the Environment 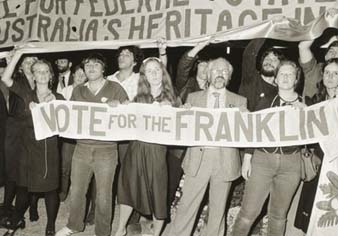 Born in Bordertown, South Australia, in 1929, Bob Hawke was Australia’s 23rd prime minister. Elected to the House of Representatives for the Australian Labor Party in 1980, he served as prime minister from 1983 to 1991.

The federal election of March 1983 was called at short notice by Liberal Prime Minister Malcolm Fraser. As Opposition Leader during the campaign, Bob Hawke expressed his party’s opposition to the Franklin River dam. The Tasmanian State Government wanted to build a dam on the river to create hydro-electricity. Many Australians were strongly opposed to the dam for environmental reasons.

On election, one of his first actions was to pass the World Heritage Properties Conservation Act 1983. This gave the Commonwealth Government control over heritage sites, such as the Franklin River. The Tasmanian Government took the matter to the High Court, arguing that the State’s right to build the dam had been denied. The High Court ruled in favour of the Commonwealth. The Franklin dam was stopped and Tasmania was paid compensation.

Born in Sydney, in 1944, Paul Keating was Australia’s 24th prime minister. Elected to the House of Representatives for the Australian Labor Party in 1969, he served as prime minister from 1991 to 1996.

Keating embraced Australia’s integration into the world economy both as treasurer and as prime minister. A republican, Keating saw Australia’s future as bound up with its Asia-Pacific neighbours rather than with Britain or Europe. He developed links with Asia-Pacific countries, especially Indonesia. Keating wanted the leaders of the region to form a group to strengthen relations. The Asia Pacific Economic Cooperation forum (APEC) held its first meeting in 1993. Today it consists of 21 member economies representing 2.5 billion consumers and more than half the world’s income.